The Church in Laodicea – Things Are Not What They Seem… 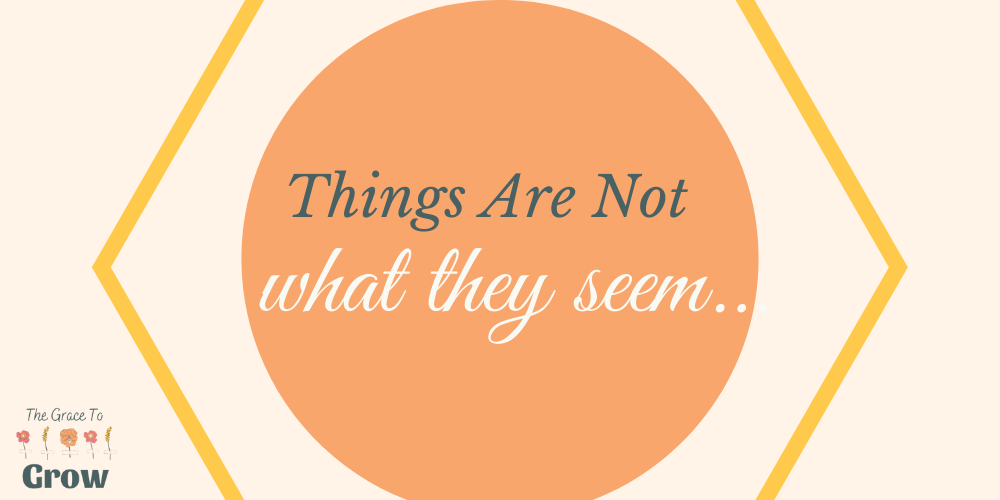 Let’s talk about the church in Laodicea. But first, let me explain something about my life.

I homeschool my kids. We have a rhythm to our days, and our mornings start with worship, Word and prayer. Worshipping and studying the Bible with kids is many things. I would describe it as beautiful, fulfilling, hopeful, necessary, frustrating, maddening, confusing, perplexing…

Honestly, it can be an exhausting thing to do. I’m not in the kid’s ministry area of church… I think for really important reasons. We’re all wired differently… and I don’t seem to be wired that way. Despite that fact, I know it’s my calling as my children’s mother to teach them about God, to worship with them, to read the Bible with them, to pray with them… to prepare them for a life-lived knowing God, loving God, and serving God.

And for me?? All that is so frustrating! I know… it’s childhood. And I try to roll with it. But I SO BADLY want them to know that things are not as they seem! To them, in their present reality, it seems that their own happiness is the goal. But I know the reality that they’re not fully grasping yet.

What I Want To Do…

I want to pull back the curtain and help them to see the beauty of Jesus and to help them understand the GRAVITY of what He has done for us. I want them to see past themselves… and their bunnies, puppies and ducks… to see that there is a broken world being offered redemption. And I have faith that as they grow, they will see it all clearly. 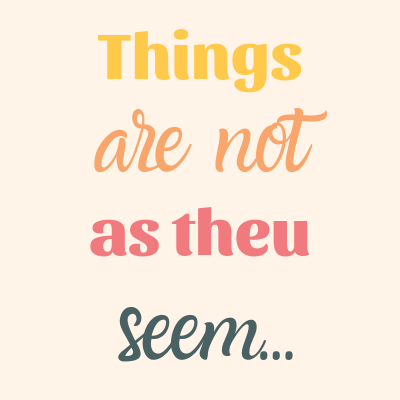 I pray this prayer every day- that my kids would know God, love God and serve God, and I believe that will be. But that being said, I’ve often said to my husband (who grew up in a non-Christian home) that while I’m grateful our kids were born into a Christian home, I do believe it can lead to kids taking the gospel for granted. It can lead to complacency and lukewarm-ness.

I share this story because I believe that complacency, no matter the cause, can lead to the issue that we see in the church in Laodicea. For them, things were also not as they seemed.

Revelation 3:15-19 says: “I know your works; you are neither cold nor hot. Would that you were either cold or hot! So, because you are lukewarm and neither hot nor cold, I will spit you out of my mouth. For you say, I am rich, I have prospered, and I need nothing, not realizing that you are wretched, pitiable, poor, blind and naked. I counsel you to buy from me gold refined by fire, so that you may be rich, and white garments so that you may clothe yourself and the shame of your nakedness may not be seen, and salve to anoint your eyes, so that you may see. Those whom I love, I reprove and discipline, so be zealous and repent.”

The church in Laodicea felt they needed nothing. They were prosperous, in control, and they had life handled. In reality, they didn’t realize what (and who) they were missing. This passage pulls apart their perceived reality to reveal to them that because they were excluding Jesus, things really were not as they seemed.

A Little Bit About the Church in Laodicea

For the Church in Laodicea, Things are Not What They Seem

John writes to the 7 churches and you can tell he has the heart of a pastor. Despite his own immense hardships, he wants to see the people of God truly flourish and he wants to see the gospel go forth. But in these 7 letters, he’s not merely a cheerleader validating and placating the churches with fluffy words. He’s actually bringing each of them their own “apocalypse;” their own “revealing and unveiling.” He pulls back the curtain and exposes their hidden reality. 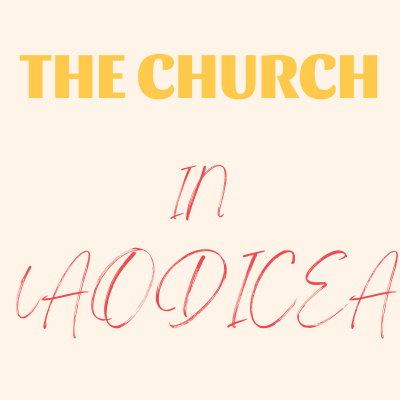 For the church in Laodicea, which is our focus right now, he indicts them immediately. He states they are neither hot nor cold, but lukewarm. Now, my background is in nursing, and it’s important to know that in health care, both ice and heat can be healing. Ice is needed to tame inflammation and heat is needed to bring circulation to a spot that needs repair. Cold is useful. Heat is useful, but being lukewarm doesn’t bring any healing at all. In essence, Laodicea is being accused of being useless.

The Church in Laodicea – They Had it All…

This church was rich and their wealth had allowed them to prosper in self-sufficiency. They could buy their way out of catastrophe, and no longer lived like they needed Jesus. On the outside, the church looked perfect, but on the inside, it hardly had a pulse. There were 3 areas in particular that Laodicea excelled in:

Despite all this, John (empowered by the Spirit) called them out saying that they were wretched, pitiable, poor, blind and naked. Those words are so intentional.

Let’s take a minute to contrast the words that were used to describe the church in Laodicea with how things appeared on the surface:

So now the question is… what about you? How did this passage hit you as it was read? Maybe you’re like me. Maybe you’re feeling convicted about your comfort. We live in a country where we are incredibly privileged. Based on national net worth, Canada is the 9th wealthiest country in the world. Last I checked, there are 195 countries in the world, so the 9th richest is a big deal. If your family income exceeds $41,000 USD per year, you are among the richest 3% in the world.

My daughter is 6. A while back, she wanted some new books. I told her no, and she said to me, “Can’t amazon just send them?” It was hilarious and sobering to hear her say those words. Because yes. Amazon could send them. I could very easily log on and order those books and a number of other things. I didn’t of course… One of the last things we need is more books lying around the house. But this here is the point… We have so much available to us that it makes us forget how needy we actually are; it makes us forget how much we need Jesus.

The church in Laodicea was rich and it caused them to fall into the trap of self-sufficiency. Don’t get me wrong, I love self-sufficiency and I believe that we should do our best to take care of ourselves and our families. But we shouldn’t push that self-sufficiency so far that we have no space for the Holy Spirit, or we sacrifice communion with Christ and His body.

I think in this condition, prayer can also be sacrificed. There are times when prayer is difficult for me… I don’t know about you. I wonder: do you think part of the North American “prayer problem” stems from this false belief in self-sufficiency? Why pray when I can order the solution from amazon? When I can just take a pill? Why pray when I could instead numb my emotions, my fears and my reality by having another glass of wine or clicking “next episode” on Netflix into the wee hours of the night?

Take a Look at the Culture 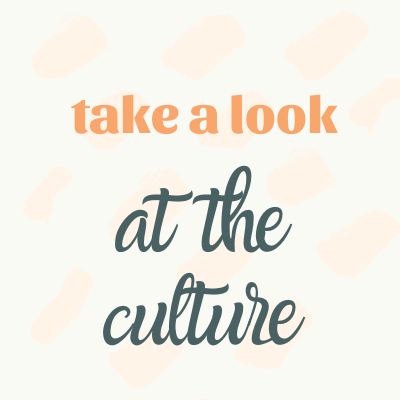 As most of us have, I’ve been observing our culture particularly closely over the past couple of years. In doing so, I couldn’t help but compare our current way of life to the people who built the Tower of Babel. Thousands of years ago already, humans conspired together to try to supersede God’s glory with their own. You know, it really is true, that Proverb that says there is nothing new under the sun. Because we’re still doing the very same thing.

So now what? Do we continue to lay the bricks and build the tower? Continue to adorn the outside while dying on the inside? Do we continue to exclude Jesus while we pursue our own glory, safety and self-sufficiency? Or do we have the courage, the faith and the humility to lay it all down?

Humility. That’s a loaded and convicting word. Do we have the humility to admit when things are not as they seem? Do we have the humility to recognize our own poverty? The true poverty that hides behind the riches. Will we heed Jesus’ warning and admit that we are poor? Wipe the dust of lies from our eyes and admit that we are blind? Will we accept that the latest fashions do nothing to cover our true nakedness?

The Church in Laodicea – Disgust and Grace

As we see the Christian church shrinking here at home (where we live in comfort and freedom), and growing in parts of the world where there is no comfort or freedom for Christians, we have to see the striking similarities between the North American church and the Laodicean church. We must see the parallels between their culture and ours.

Now let’s imagine for a minute if things were as they seemed. What it would look like if we accepted the salve, the gold and the white garments that Christ is offering, and if one by one we would repent, turn, and live a life of faith that is zealous? What an impact Christ would have on our culture, through His church, if we would only heed the warning that He gave to the Laodiceans.

Things Are Not What They Seem

Right now, things are not what they seem. We worship in freedom with beautiful programs and well-attended churches. But Jesus sees through it all. And yet, there He stands. Offering grace. Redemption. Offering to make things new and to make things right.

Verse 20 of Revelation 3 goes on to say this: “Behold, I stand at the door and knock. If anyone hears my voice and opens the door, I will come into him and eat with him, and he with me.” Often, that verse is used in evangelism, but Christ in this context is applying it to the people of his church. He’s standing on the other side of the door knocking, offering us true riches, offering us communion with Him. Offering us a faith that truly flourishes; not just on the outside, but on the inside, too.

How to Live With Intention

Get Your Priorities Straight 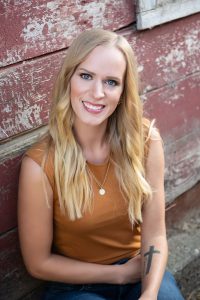 1 shares
We use cookies to ensure that we give you the best experience on our website. If you continue to use this site we will assume that you are happy with it.Ok